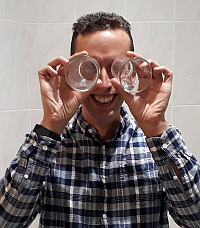 Steve Barley (56) is the writer who came up with the madcap idea of a phonetic puzzle story, but is forever grateful to his daughter, Bethany, for shortening it to phuzzl.

Steve describes his career as, ‘illogical steps to a logical conclusion.’

‘My first publication was in 1990, a 300 page Ph.D. thesis on the subject of Cosmic Ray Physics, which didn’t exactly become a bestseller, but it did open doors – mostly as a doorstop. For many years the only writing I did was in code, when I was a computer programmer; or in red ink, when I switched career to become a teacher.  Both were an education. Now, instead of using humour in my teaching resources to entertain teenagers, I’m taking time out to write fun stuff that hopefully entertains everyone.’

Dr B, as his former students knew him, has been taking his writing seriously – in presentation if not in subject matter – for well over a decade now and has had articles published in the national press including the Independent on Sunday and SHE magazine. He presented a slot on BBC Three Counties Radio for a year called Writers' Block, was a Creative Writing tutor for North Herts College, and remains an active member of Verulam Writers’ based in St Albans.

Steve's other eccentric passion in life is creating and filming themed obstacle courses for the grey and black squirrels in his garden, and has had nearly 4 million views on his You Tube Channel.

He writes phuzzl stories ‘to make people smile, laugh, or groan…but always in a good way.’ His writing ambitions are simple, to…

But enough about Dr B...