New to phuzzls? Click on the - How to Phuzzl - link in the main menu. Otherwise, you'll love finding these 20 Big Screen Romances. Movie titles are hidden in checklist order which, depending on the size of your screen, appears alongside or below the story (Hint: try turning tablets and mobiles to landscape view). Your progress autosaves in your device's cookies should you need a break.

There was no answer even after several presses of the doorbell. Jamie was tempted to bang on the polished black door but didn't feel it was the right thing to do at a funeral parlour.

Instead, he fumbled in his drainpipe jeans' pocket for his smartphone and checked the time of his appointment with Mr Schilling, the funeral director. No, he wasn't late. 'Maybe they're all dead?' he muttered to himself, and then frowned at his own irreverence. Jamie's Converses crunched on the gravel drive as he peered through each window in the Victorian red-bricked frontage looking for signs of life. No luck.

Spotting a wide archway off to the left, he wandered through into a rear courtyard. Open-fronted garages held two gleaming funeral cars and a Mercedes hearse, while opposite were store rooms and a workshop accessed by half-open double doors. From inside, a faint tuneful humming could be heard over the whirring of an air-conditioning unit on the outside wall.

Jamie knocked on one of the workshop doors and entered. Inside, the air was cold and industrial lamps illuminated two long rows of coffins in various sizes and designs lined up like horizontal soldiers on trestle supports.

The humming stopped as Jamie called, 'Hello? I'm looking for the funeral director.’ A stooped and wrinkled lady holding a duster and a tin of Mr Sheen stepped out from between two of the coffins. Sharp eyes scrutinised Jamie and he resisted a sudden urge to tuck in his denim shirt. Instead he said, 'I spoke to Mr Schilling earlier, he offered to show me round at two o’clock. I’m Jamie Pettifer.'

'Reg’s told me nowt, but I suppose, now you're here…' she put the polish and duster down on a nearby workbench, '…I'm Ethel, is it the works you’re after love, or something short and simple?' 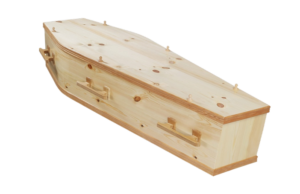 'Mr Schilling said he'd show me everything. To tell you the truth, I'm not familiar with the behind-the-scenes practical stuff that goes on after death. That’s why I’m here.'

Ethel shrugged. 'Not surprised at your age; late twenties if I had to guess? Anyway, we'll start with the mid-range coffins.' She walked over to a light-coloured casket. 'This 'ere's made of Derbyshire hill pine, it's got more branches than your average fir, so when it’s treated it produces a lovely finish.' She traced the whirlpools and contours in the grain with a gnarled finger. 'You get a beautiful knot in hill pine. Pricey mind.'

Ethel pointedly eyed Jamie's Converses. 'We also do a discount version in flatpack, love. Store easily under any elderly Aunt's bed that will. When her time comes, pull it out, bang in a few nails, pop Auntie in, and Bob's your newly widowed Uncle.'

Jamie smiled at her candour before being ushered along the row of coffins. 'Maybe our new range is more to your taste,' said Ethel. She stopped at an expensive-looking mahogany casket containing a clear panel in the lid at one end. 'We call this model, Window on the Soul. It’s for those a little bit ripe like. Air tight seals keep in all the usual odours after your loved one has gone. With the window…' she tapped the glass panel, '…mourners can pay their last respects only now they're sniffing for the right reason…if you get my drift?' Open-mouthed, Jamie nodded.

'The graduate student we had working here last summer flogged quite a few for us on eBay – the heat wave helped o' course – but we also sell 'em direct from here too. Eternity Solutions is our name if you want to goggle it on the interweb.'

'You mean Google it on the intern…' started Jamie but Ethel wasn't listening.

'Not so good for burial at sea. As we found out with old Captain Drummond. The Gasman investigating the smell found him.

Reg had to make one from scratch, pop the Captain in sharpish, then drive the deceased all the way to his hometown up in northwest Scotland.’ Ethel shook her head. 'They like their funerals fast up there. In all, Reg were nearly two days sleepless. In sea at Ullapool rough enough to wash the whiskers off Neptune himself, Reg realised e’d forgotten to drill holes in the coffin to let in the water. The Captain spent an hour bobbing like a cork until the coastguard eventually boarded him.'

Jamie was aghast as Ethel continued, 'Finally scuttled him using a Swiss Army penknife. I always said Captain Drummond had a screw loose.’

Ethel slapped the side of an open casket behind her. ‘Now don't forget your lining. This one's made from pure silk…' Ethel paused. '…are you all right, love? You look like you've seen a ghost?' She glanced down. 'Oops, that's Julie, used to work behind the bar at The Fox. She was a pretty woman until that bus hit her.' Ethel closed the lid. 'She don't look much now but a bit of putty and some powder and she'll be right as rain. Reg is a dab hand at faces, he's got sculptor's fingers. Good with icing too if you want a likeness of your loved one for the wake? Something to remember them by, at least ‘til teatime.'

Jamie gulped at the thought. Next on the tour was a long workbench holding a half-assembled rectangular box.

'This is one of our basics range,' said Ethel, 'for those unlucky enough to die with no family. It's just a chipboard carcass. A blank abode Reg calls it.' She leaned towards Jamie who got a waft of Lavender wood polish. 'Who needs frills, eh, if no one's there to see your chips get oven-cooked?' She cackled, then suddenly turned serious. 'I hope I never out-lives my George,’ she said. ‘He's my husband, but 'e ain't as clever on his feet as he was during our courtin' days at the local tea dance. Still got his gift 'o the gab though. Insists that if he goes first he'll have a word with the man above and find a tea dance in Gravesend just for us.' Ethel gave a long sigh and her eyes misted over.

'I suggest we move on from coffins,' said Jamie in an effort to steer his guide away from her husband's mortality. Ethel nodded, then led the way through a connecting door to the main building. As they walked along a short corridor, Jamie spotted a glass-fronted, deep-set textured painting of a cat with all four legs stretched out. He commented on how lifelike the fur looked.

'That's Fluffy,' explained Ethel. 'Best mouser we ever had. That is…until she chased one into an open grave ahead of Roxanne McGinty.' Ethel shook her head. 'Roxie used to work in the local butcher's shop, big girl she was. Reg had just re-greased the leather straps holding the coffin. No way the pall bearers could stop. Fluffy died of a broke back. Mount anything can Reg.' Jamie gaped at the flattened feline as Ethel added. 'Not so fluffy now o' course.'

The corridor led to a room that had more curtains than windows. Several sumptuous white leather settees were gathered around a low glass table on which glossy brochures were arranged in fan-shapes.

‘Reg always says, "Dead people deserve things to be dead right." ’ Ethel pointed at the brochures, ‘Which is why he tailors every funeral to the individual. That goes for the clothes too. Shortly after those roof riots at Parkhurst, we were asked to dress an inmate, who’d recently fallen on hard tiles so to speak, in a prison guard’s uniform.’ Ethel chuckled. ‘His family did it so he’d have the last laugh being incarcerated dressed as an officer. And a gentleman – who was a bit of a womaniser when he was alive – left instructions for a little extra support down below at his open casket viewing.’ Ethel winked. ‘The queue of lamenting ladies was round the block for that one. Which reminds me, I promised to get Reg some new socks.’

‘Sounds like you’re very …thorough,’ said Jamie. ‘What else do you offer?’

‘There’s cremation o’ course.' Ethel pointed at a picture on the wall of a chapel with a disproportionately large chimney. 'Very popular with the baccy brigade.'

'They love the irony of finally getting round the smoking ban,' said Ethel. 'Also, cremations aren't as stuffy as church services...'

Jamie tried to interrupt but Ethel was in mid-flow.

'…and you’re allowed to choose any music you love. Actually, I say that, but it must be something Reg can play on his organ or his tape player.’ Jamie wondered if that was any choice at all.

‘Although, Marge, who used to be chair of the WI, God rest her soul, did raise a few eyebrows when she glided through the sliding doors to the tune of Gracie Fields’ Wish Me Luck (As You Wave Me Goodbye).' Ethel chuckled. ‘Aye, as services go, that was an affair to remember.’

Jamie picked up a brochure. ‘I’m afraid I’m more of a church man myself. What links do you currently have with St Cuthbert’s in the village?’ 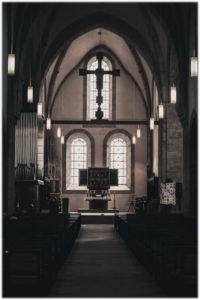 Ethel shook her head. ‘We buried the last Reverend in his own graveyard a year or two back. Locums come and go but they’re pretty useless. St Cuthbert's a bit on the small side and the Romans had better heating. If it’s a large service you’ll be wanting, then it's a bit too tight and icky in the hot weather…' Ethel gave Jamie a nudge, '…but good for cosying up in winter if you want yourself a girlfriend.' Jamie took a half step back.

‘Oh, I forgot,’ said Ethel. ‘We have a special deal on at the moment that's proving quite popular, what with times being hard and all. We call it Shrine and Dine, it’s our standard funeral package followed by a full English breakfast at Tiff and Niamh's diner on the High Street. Now that's going out with a banger eh!’

Jamie returned his brochure to the table and said, 'I think I've heard enough. It's a shame Mr Schilling isn't here as he said he'd talk to me about this weekend.'

'Oh, don’t get yer hopes up for Saturday,' said Ethel, 'Reg is having his bunions lanced at Dr Gilbey's. Anyway, the church is booked all day for weddings. And a funeral on Sunday after the morning service means that's out too.’

‘Yes I'm fully aware…’ started Jamie but was interrupted by the silent appearance of a sombre-faced man in his late fifties, whose prodigious height and pronounced stoop reminded Jamie of an old English longbow.

The man looked from Jamie to Ethel, who said 'Hello Reg', then back at Jamie. There was hesitancy in his voice as he shook Jamie's hand and said, 'I see you've met our wonderful cleaner.'

This time, it was Jamie who gave a beaming smile…

..and Ethel who looked horrified.

If you're left crying by these romantic movies, then don't worry, as all the answers are revealed here.

Download a printable Big Screen Romances phuzzl PDF version (includes answers at the end) if you prefer. Make sure you recycle it by passing it on for others to do!